For a recent Professional Development day, I was asked to facilitate a conversation with colleagues about feedback.  I decided to share my attempt at creating a feedback loop, rather than simply gathering feedback, based on an assignment in a recent graduate course on Universal Design for Learning (UDL).

Of course, it’s hard enough to keep up with feedback, let alone to close it into a loop, but I decided to give it a try recently, using a combination of surveys we gave students and feedback from an exam wrapper.  My colleagues and I have been working with exam wrappers for about five years now and we have just seen their efficacy dribble away, lost in the shuffle and noise of the daily life of keeping up with assessments and grading and revisions and so on.  But the loop concept is different.  This post includes screenshots from the slide show I presented to colleagues about a time when I did manage to turn feedback into a feedback loop.

It began with a Google Form we gave to all 7th grade math students asking questions about our shared math practice.

As you can see in the picture above, the results indicated that students found value in working in small groups to get feedback on their Skill Assessments (quizzes).  However, I then realized this wasn’t really the question that I wanted to ask about my practice, so I asked my students to take a second survey, specifically about how I try to teach only in small groups (with no full-class instruction).

I always ask students to put their names on their surveys, so I was able to follow up with the four students who indicated that having instruction in small group was only a three for them.  Three of the kids gave contradictory feedback, such as one who said he doesn’t like to be called to small group because he already knows the material but who comes to group when it’s optional every single time–if he is coming when it’s optional, then I’m not so worried about him coming the few times it is required!

With that said, I was concerned about one of my students who wrote the following:

This feedback was not a surprise to me, based on what I had observed in class, but it was great that he had an opportunity to clearly describe his experiences.  And, since the survey was not anonymous, I could work directly with him to develop a plan that reflected his needs and was built with his input.  We decided he would try using the recorded class videos that are available on the topics for each Module.  Specifically, he decided he wanted to watch the video first to preview–I usually have 2-3 groups for each class if a topic is for a required group, so he would be able to come in the second or third group for instruction.

After a few weeks of a combination of videos and small group instruction, the student wrote the following on his exam wrapper: 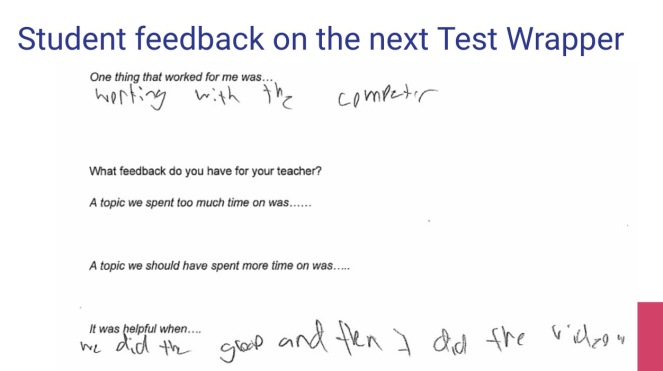 This is how the “loop” closes–we had an issue, we brainstormed a plan, we implemented the plan, and the student gave feedback on the efficacy of the results.  If the student had expressed a lack of success after we implemented this practice, he and I would have met again to brainstorm some other ideas; if it weren’t the end of the year (and so there are no more Module Assessments from which to gather data), I would follow up with him regardless to make sure that this approach continued to be effective across multiple content areas in the year in math.

It’s also important to note that I say “we” deliberately–a feedback loop only works with the cooperation of teacher and student.  In general, feedback loops need an infusion of external feedback in order to remain effective, rather than internally recursive.

2 thoughts on “Creating a Feedback Loop”